Albert Gleizes , painter, engraver, illustrator, and author left a remarkable body of work which has an important place in the history of art in the C20th. During the cubist era which was his most productive, he continued his research until the end of his life without diverting from it. His apprenticeship started with his father a technical designer, Founder of the Assocation Ernest Renan and then the group L’abbaye de Créteil, he became associated with Le Fauconnier, Metzinger and Delauney. In 1911 he participated in the famous Salle 41 du Salon des Independants, dedicated to the cubist movement. In the same year he exhibited at the Section D’Or and the Salon D’Automne until 1914. Demoralised, in 1915 he left for the Unites States, Barcelona and Bermuda and oscillated his painting under the influence of Picabia, Duchamp and Blue Reiter. On his return to France in 1919 he became more and more preoccupied by social and intellectual questions and in 1927 founded a community of artists/ artisans at Moly-Sabaton in L’Isère. He progressively broke away from the Parisien scene. In 1931, in a step towards a spiritual research he became a member of the Abstract/ Creative movement, because he saw in the abstract movement a way to fight against materialism. 1934 marked a major step in his research of a rythmical approach to his painting and at the same time murals made up an important part of his work that he exhibited in 1937 next to Léger and Survage. In 1939 he settled indefinitely in St. Remy de Provence at Mas de Méjades where he created a community of artists. Converting to catholicism he wrote ‘man has become a painter’ which was a resumé of all his research. Since the beginning of his career, Albert Gleizes wrote many theoretic thesis about his concerns and research. Through his work ‘Du Cubisme’ printed in 1912 he is considered along with Metzinger as a precursor and theoriticien of the cubist movement. Following on from this he became even more interested by composition and dynamics than the form. He illustrated several works notably the ‘Pensées de Pascal’ in 1950. In 1953 for the last time whilst he was alive he participated in an exhibition on Cubism organised by the M.N.A.M.. His work is shown in some of the biggest museums in the world and some of the most important collections. 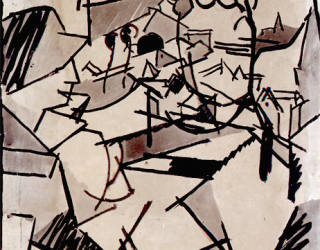 In 1915 Albert Gleizes and his wife Juliette Roche left France for the East Coast of America. The American period of Albert Gleizes proved to be very productive. In NY the artist discovered a town resolutely modern, where the audacious architecture, the bright publicity boards of Broadway and the Jazz drove him to reconsider the question of movement in painting. For a couple of months the young couple resided in Tarry Town (NY) of which Gleizes painted the same view of the left profile of Juliette wearing a hat. The dynamics of the work shown here is in the organisation of the different aspects which appears to show the different shapes of a kaleidscope in angular geometric forms. ‘Woman at the Window’ gave its name to quite a large painting named Tarry Town although up to this point it has not yet been located.